Uncontrolled and unmonitored sand and gravel mining has destroyed large areas of forested land in Plymouth.  One of the most egregious situations is the bait and switch pulled by Plymouth Sand and Gravel with the approval of the planning department.

In order to get a sand and gravel mining permit for land it owned off Long Pond Road, Plymouth Sand and Gravel told the Town it was going to build a cranberry bog and one house — “approved uses” for the residential.  Instead, it is now 25-acre industrial solar field — on residential land.  Plymouth Sand and Gravel is a sister company to Kingstown Trucking, which is mining the County Wood Lot.

The County allowed Plymouth Sand and Gravel to extend its mining operation on to the County Wood Lot and has refused requests to document the boundary lines.

As this example shows, sand and gravel mining operations are essentially unregulated in Plymouth.  Special Permits issued by the Zoning Board of Appeals are routinely ignored, the rules bent, and planning and building department staff make closed door deals with developers.

The Plymouth Sand and Gravel site next to the Wood Lot is an egregious example of the wholesale failure of town officials to ensure that the law is enforced.

Shown on this map is Plymouth Sand and Gravel’s land with an industrial solar facility owned by Blue Wave Capital on what was once a pristine forested woodland.  This land was and still is zoned Rural Residential under the Bylaw. How did this happen?

In 1995, Brad Cushing asked the Zoning Board of Appeals for a permit to remove sand and gravel from “approximately 40.6 acres, more or less, off Raffaele Road and off Russell Mills Road” in Plymouth, on Map 83, Lot 19. The permit application is here:

In the permit application, Cushing, through his lawyer, told ZBA that the sand and gravel mining was necessary “in order to construct cranberry bogs on the property.”  The reason for saying this is that sand and gravel removal is only allowed if after the removal is done the developer has an “approved” end use.  Agriculture — cranberry bogs– are the holy grail in Plymouth — agricultural use gets special waivers and so a permit for bogs is always approved.  Here’s Cushing’s plan for the “proposed 6.25 acre cranberry bog” that was supposed to be on the site.

In 1996, the ZBA unanimously granted Cushing a Special Permit giving permission to remove “850,000 cubic yards of sand and gravel and construct a single family dwelling.”

Note: The Town had a right of first refusal over this 40.6 acres since it was in Chapter 61, but it declined to purchase the land.  See, Special Permit 2712, paragraph 1.

Today, a cranberry bog and single family home are no where to be found on this Lot 19E.

Cushing mined off the 850,000 cubic yards, at a minimum — possibly even more.

Once the mining was done and the natural features of the land completely and irreversibly destroyed, Cushing was left with a barren pit.

Through his lawyer, Cushing asked the Town Planner to give “his perspective” on Condition 1 of the 1996 Special Permit which limited the use of the site after mining to a cranberry bog and single family dwelling.  Bending to the will of the sand and gravel mining industry and Mr. Cushing’s lawyer, the Town Planner told Cushing to go ahead. 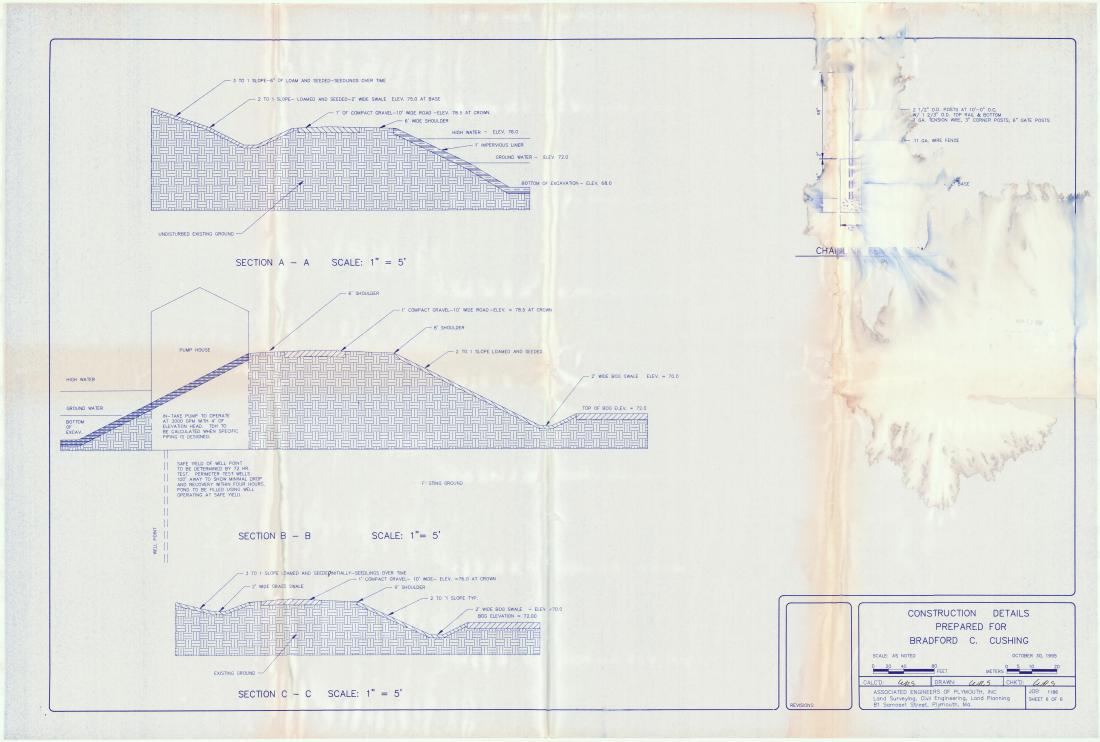 Once the mining operation was done, Cushing returned to the Town asking for permission to put in a 25-acre industrial solar facility. Even though it is residentially zoned land, and was supposed to be a cranberry bog and one house, the Town Planner said OK.  This was a bait and switch-the same type of shell game being played by the County and Kingstown Trucking over the mining operation and alleged solar facility there.

There are dangerously steep slopes on Lot 19E that pose a threat to public safety.  The County refuses to conduct a survey to show where the bounds are.  Citizen activists have visited the site and report that granite bounds that are supposed to be there have apparently disappeared.