The Plymouth County Commissioners are violating Massachusetts law and the Plymouth Zoning Bylaw by allowing Kingstown Trucking Company and its owner, Brad Cushing, to start sand and gravel mining operations on the County Wood Lot off Long Pond Road in Plymouth.

The 2015 Special Permit issued by by the Zoning Board of Appeals to Kingstown Trucking/Brad Cushing for the Wood Lot mining operation requires performance bond.

The purpose of a performance bond is to provide funds in case the developer fails to properly restore a sand and gravel mining site — which happens often in Plymouth.

Kingstown/Cushing have NOT filed the performance bond — but have been allowed to start work anyway.

“A performance bond determined by the Building Commissioner, and directly tied to the restabilization of the work site, shall be required in an amount equal to a documented, verifiable estimate of the cost to vegetatively reclaim the work site according to the site plan and existing conditions site plan. The estimate shall include an adjustment for projected inflation or other predicable factors over the term of the permit plus one year.”

Other mining sites in Plymouth have not been  properly reclaimed, but the Town zoning officials have done nothing about this.  For example, here is what a  “vegetatively reclaimed” mining site looks like on Kingstown/Cushing’s property abutting the Wood Lot. When concerned residents viewed the site in July 2016 there was erosion and no plants meeting the requirements of the Bylaw that govern site restoration on mining sites. 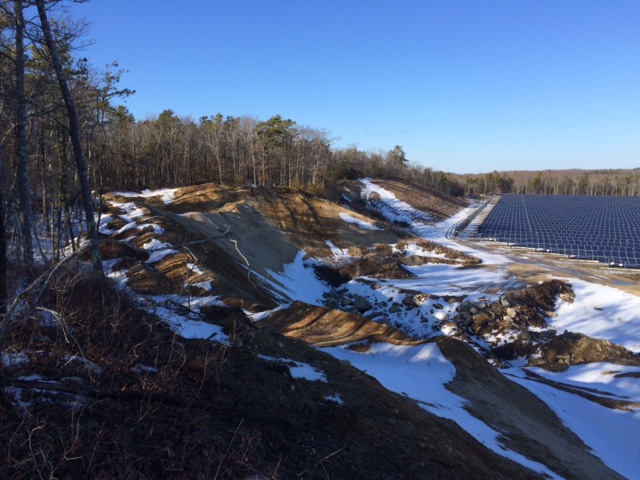 The County Commissioners are violating the Bylaw because they are allowing the mining to begin without an “approved end use” for the Wood Lot site.  For more on this issue, check out other pages on this site.

All of this work is causing damage to the environment in violation of Massachusetts law.

View all posts by savethecountywoodlot